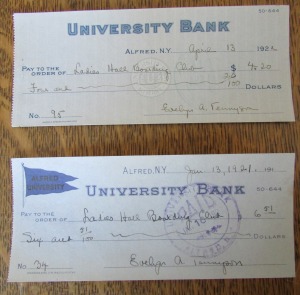 Like today, Alfred University students 100 years ago had to pay for room and board in addition to their tuition. Because of strict societal norms the men’s residence halls were on one side of campus (north) and the women’s on the other (south side). Men boarded in Bartlett Hall and Burdick Hall, the latter of which was demolished in the 1950s. Women boarded mainly in The Brick, which was then known as Ladies Hall. Here we see two checks written by Evelyn Tennyson Openhym, Class of 1924, for whom the current Openhym residence hall and the Openhym collection of books at Herrick Library are named. These checks are from January 13, 1921 and April 13, 1922, indicating that Evelyn’s rent was due on the same day each month during the school year. It’s certainly curious how her rent went from $6.51 in 1921 to $4.20 in 1922.

This entry was posted in Campus Buildings, Memorabilia and tagged Evelyn Openhym, The Brick, women. Bookmark the permalink.